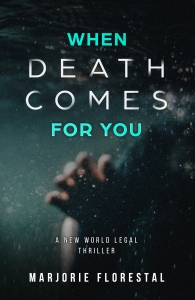 It is 1991, and a bloody coup has plunged Haiti into chaos. Thousands take to the sea in a race for their lives. In Boston, Haitian-American lawyer Renée François gets a strange call.

In the dark, frigid waters of the Caribbean Sea, the US coast guard stumbled on a woman surrounded by 18 dead bodies–one of them a five year old child. An autopsy revealed no signs of drowning. It looks like the lone survivor is also a murderer.

But something is wrong here.

As Renée races to untangle the mystery before her client is deported to war-ravaged Haiti, she must battle her own demons to discover who killed all those people. And who is trying to kill her.

Buy it on Amazon

By the Light of the Fireflies

In 1980s Brooklyn, a 10-year-old Haitian girl is the only witness to an unspeakable crime. She must find the courage to testify in a case that could tear her family and community apart.

A young lawyer must fight to keep her DACA client from being deported. The client is her sister. Click here to read this short story.